Welcome to RTLS Studio 2.0 Product Tour. This page contains information about new features of the RTLS Studio and detailed guides on how to use them properly.

In RTLS Studio 2.0 we introduced a multi-user experience for our customers. We have migrated our whole web-page system into new framework to be able to provide access to all of our software products through a single interface. System admins are able to create as many user acounts as they need. Every user has its role and configurable permissions for different parts of our software product. This is useful when you need to make sure some of your users will not be able to change important parameters of the system. All users log into the system using their private credentials.

Logging In, Logging Out

With the arrival of the new RTLS Studio, all communication between users, server and third-party software is now encrypted with HTTPS (Web Content, REST) and WSS (WebSockets). Versions of both protocols without encryption are accessible as well. When users connect to the encrypted version of Sensmap (or any other page using WebSocket communication), the WebSocket protocol is guaranteed to be encrypted as well.

Every REST request must now contain an API key, for the server to be able to authorize the request and provide data for the client.

A profiler is a powerful tool helping users to show more detailed information about the positioning as well as the optimize its performance. We have added real-time information of the First Path for every anchor used in the calculation. When used with RSSI you are able to identify the amount of bounced signals caught on each anchor which is one of few factors making the localization worse. With this knowledge, you are able to identify critical areas of your localization system and optimize them.

More details about Enhanced Profiler you can find in section Troublehooting and Tips.

RTLS.io is a new tool in RTLS Studio which provides a link between virtual geo-zones and Advantech IoT relay units. In this case, acoustic or light feedback can be triggered based on events such as Tag (group of Tags) entering or exiting defined virtual geo-zone. Using this approach you are able to link the RTLS system to as many electronic devices as you need, to make it unique and more sophisticated.

More about RTLS.io can be found in documentation of the RTLS Studio in section RTLS IO. 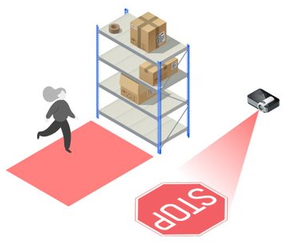 The whole user interface has been graphically overhauled. Design of all the software product is now unified with the possibility of a fluent switch between applications and constant access to system notifications. All menus have been put to the expandable left panel, making it easier to navigate between parts of the current application. The user interface of managing applications has been made more tablet friendly.

Users no longer need an access to server's filesystem and terminal, to be able to update RTLS Studio to a newer version. This could now be done using Backup & Restore web interface. Since there usually is no internet connection on the server machines, the update is done simply by providing an update package downloaded from the Partner Portal through dialog window during web update. Everything else is automatic.

For a very fast system initialization, there is a new feature called Anchor Auto-Deployment. Distances between anchors are measured using TWR during their initialization. These distances are then used to calculate the rough position of each anchor in relation to others. Deployment of anchors is simplified by moving, rotating and flipping this model and applying it to a plan. This feature is still in BETA stage and should be used with up to 6 anchors which are placed at the same height.

Futhure information and how to use Anchor Auto-Deployment feature can be found in RTLS Studio documentation in section Anchor Auto Deployment.

There are some major backend improvements as well. PHP has been updated to version 7.2 and its speed fully compensates for Laravel security overhead. Since the long-term support of Ubuntu 14.04 is coming to its very end we've added support for the new 18.04 stable version. Our REST API has been cleaned up (new response messages, better datastream endpoints, error handling) and RTLS Server has been tweaked to be able to calculate even more correct positions, than before.

More details about migrating to Ubuntu 18.04 you can find in section RTLS Studio - Update Guide.

RTLS Manager contains Status panel which helps you better understand the problems in your system. It is informing the user of misconfiguration between anchors and other anchor related issues. The status panel is located at the top right corner of the Anchor Summary tab in RTLS Manager.

More details about the Status panel and how to use it for troubleshooting you can find in section Using the Status Panel.