This page contains information about new features of the RTLS Studio and detailed guides on how to use them properly.

Now you can further expand your RTLS infrastructures without having to deal with performance issues. Previously larger installations with hundreds of tags might require a middle class or even high-performance class server. Especially once tags transmitting with high frequency (5 Hz or higher). With a 2.3.0 update, we have rewritten the core calculation engine significantly to utilize multiple cores/threads, thus decrease server requirements. For a better comparison, we have improved the performance by 4x so, if we were able to calculate the position for up to 300 tags on the previous RTLS Studio, we are now able to calculate up to 1200.

Synchronization of anchors is an essential part of TDoA location powered RTLS to ensure reliable and sub-meter position accuracy. RTLS Studio now supports not only UDP Sync but also the TCP Sync gen2 scheme to empower greater flexibility of network deployments as the synchronization can now pass through multiple routers.

Docker version of RTLS Studio is still in ALPHA phase and is not publicly available. If you want to participate in ALPHA testing, please let us know and we will provide you with an access to our Docker repository.

RTLS Studio for Docker is a way of making the RTLS Studio platform agnostic. Since the porting of RTLS Studio to different operating systems is not an easy task due to specific restrictions and dependencies, the Docker is a perfect solution for running it in different environments. As long as your platform can run Docker you can run RTLS Studio as well. When running the Docker container on Linux machine the performance of the RTLS Studio is significantly better than when using a virtual machine. For Windows, the performance is comparable with virtual machines.

More infomation about how to use RTLS Studio for Docker you can find in section Docker Installation.

More details you can find in section Procedure for Master Selection.

Anchor restrictions give additional information to the positioning algorithm. The possibility to export or import anchor restrictions presents a popular option due to the rapid saving of time once you deploy dozens of anchors. It is a powerful tool, especially when used together with RTLS Player.

Here is a use-case. Let’s imagine that the anchors were deployed within the venue and now you need to set masters.

There have been several changes in Sensmap to make the work with huge installations more comfortable. First of all the limit for plan zooming has been significantly increased, for users to be able to see all the details on very large plans. Also, the origin graphics have been made bigger with a clear definition of X and Y axes and the direction in which their values are increasing (same colour coding as in RTLS Planner). Users are now able to see the real masters in Sensmap. These can be distinguished from other Anchors by the grey signal lines around their markers. Anchor restrictions can now be imported/exported to simplify system testing and deployment.

In previous versions of Advanced Zone Settings the timestamps of the events were set to the time when the event was fired. After this update, the timestamps correspond with beginnings of the actual events. 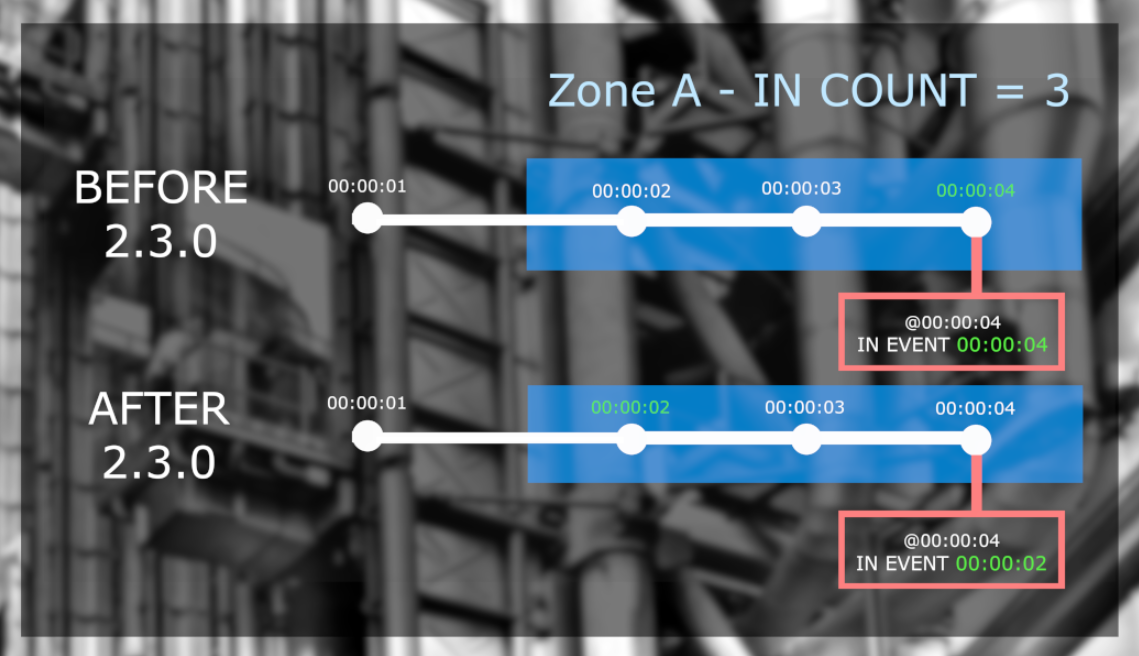 More details with several examples you can find in section Advanced Zones.

There are several logs in larger installation, that can be in size of many GB. We have added new option regarding the creation of capture file packages. You can now select whether you want to include these logs, or not (to reduce the the size of the final package). When users are sending us the RTLS Captures, they can include the logs only in one of the packages and let the others without logs to dramatically reduce the size of the uploaded files. You can always see the information about how big the logs actually are for each package.