If your RTLS Studio is running on Ubuntu 18.04 (RTLS Studio 2.0 and higher) follow GUI Web-based Update.

For the RTLS Studio update you can follow the steps:

As the First step, you need to update your RTLS Studio for version 2.1 in the case of our example.

If you select yes, all your data will remain intact. However, if you select NO, your database will be completely erased, that means all your buildings, floor plans etc. will be deleted for good!

Once the RTLS Studio is updated, you will also need to erase the cache memory of your Google Chrome browser (if you are using it). To do so, follow the guide from Google which can be found here.

Create a backup of your Studio 2.x using Backup & Restore. 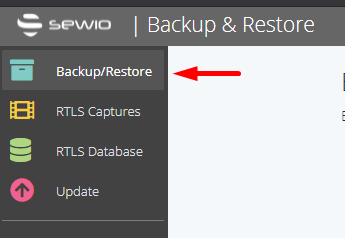 After the backup starts. It might take several minutes.

Download the backup and store it on an external drive.

Install the same RTLS Studio version in which you made the backup.

Or if you are using VirtualBox, you can download the VirtualBox image with preinstalled RTLS Studio (version 2.1.0 in our case)

Copy the backup file to new server, where OS Ubuntu 18.04 and RTLS Studio 2.x are installed.

A limitation of the backup size which can be uploaded via GUI is 500MB.

If you file is bigger than 500MB, copy the downloaded Backup file to a new server in a directory “/home/sewiortls/backups” (e.g., using WinSCP) and continue with next step of RTLS Studio recovery process.

The backup will upload.

When the backup uploaded you will be notified.

Perform the RTLS Studio recovery process from the backup file you copied.

When the backup is uploaded, the restore will be possible to do via RESTORE button.

When finished you will be notified.

Now, you can follow GUI Web-based Update guide to update your RTLS Studio to the latest version. The last version is available on Sewio Partner Portal.