From where can I get the latest version of the RTLS Studio?

You can download the latest version of the RTLS Studio from our Partner Portal where you can also find the Update Guide. You don’t have to have an active Internet connection during the update.

How is the RTLS Studio delivered? Is it on a host server or a virtual machine?

How to restore the RTLS Server to factory default settings?

Restore feature may be useful if you tested RTLS Studio and now you want to return to the factory defaults and historical data and settings of the RTLS Studio (e.g. used floor plans) are not important to you. In some cases Factory Restore can help solve a software issues.

Important note: Factory Restore will result in the loss of all configuration settings (such as position of Anchors, plans, historical positions) and logs. It is recommended to create a backup before Factory Restore.

Is it possible to run the RTLS Studio in VMware?

What are the parameters for the host server?

This depends on the size of the installation. The recommended server specs can be found on page Server Specification in Project Delivery section..

What is the operating system where the RTLS Studio runs?

For the RTLS Studio 2.x and higher is recommended to use OS Ubuntu 18.04 Server Edition 64-bit (can be downloaded here).

What is the recommended VirtualBox setting for the smooth run of the RTLS TDoA Kit?

To achieve a good performance of the RTLS TDoA Kit make sure that the virtual machine in the VirtualBox has assigned enough resources. The following VirtualBox settings are recommended. 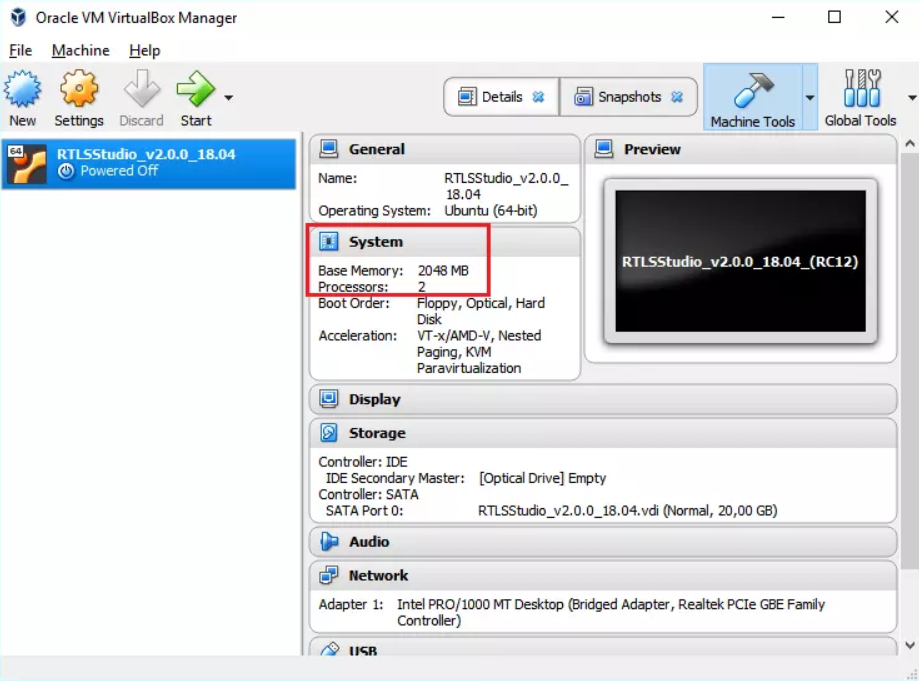 Is it also highly recommended to turn off all power saving features or set up a high-performance profile in the Host Operating System. This recommendation applies, especially to notebooks and mobile devices.

The figure below is an example of the performance settings for OS Windows 10.

What is the required memory of the Hard Disk of the server for the database?

This mainly depends on the number of devices and refresh interval. For more detailed info, please check the Advanced Guide, section disk specification.

What ports does the RTLS Studio use?

All ports that are used by the system can be found in the Advanced Guide, section network architecture and required ports.

Why the movement of Tags in Sensmap stops when Zones are displayed?

The issue causing the Tag to stop moving in Sensmap is connected with using the Zone type “valid”. When you remove the “valid” Zone or change the type of “valid” Zone to another type of Zone, the Sensmap should work as expected.

Why can't I see any anchors (feeds) in Sensmap?

Feeds in the DB are created only for active anchors which means that anchors are either in initialization or sending sync reports or receiving blinks.

There are three common reasons why alias of anchor in RTLS Manager is visualized as "FEED NOT CREATED".

The second reason can be the IP address of the Sensmap server. It can be found in RTLS server Setting -> Server Communication Settings -> IP. In most of the installations RTLS server, database and Sensmap server are on the same machine so there has to be localhost IP address: 127.0.0.1

The third reason can be not working database or connection between the database and RTLS Studio. You can find out in RTLS Monitor by the status of RTLS Server service. If it is active and running database connection should be working. If the status is constantly restarting with uptime there then it can be some issue with connection to database or different type of issue. In this case please contact our ServiceDesk for help.

Minor version of Ubuntu 18.04.6 does not accept some packages what are in RTLS Studio install bundle. This release of Ubuntu does not support either online or offline installation of the Studio 2.5 (or lower). The packages in RTLS Studio install bundle already contains packages for Ubuntu 18.04.4 and some are not accepted by this newer minor version of the Ubuntu and installation can not be finished correctly.

The only solution is to install Ubuntu version 18.04.4.

When Ubuntu version 18.04.4 installed do not perfor command

because it will update your Ubuntu to version 18.04.6.